A Swiss kindergarten within quartet of concrete blocks

Like "one big house", the building consists of a single open-plan space with simply furnished classrooms. 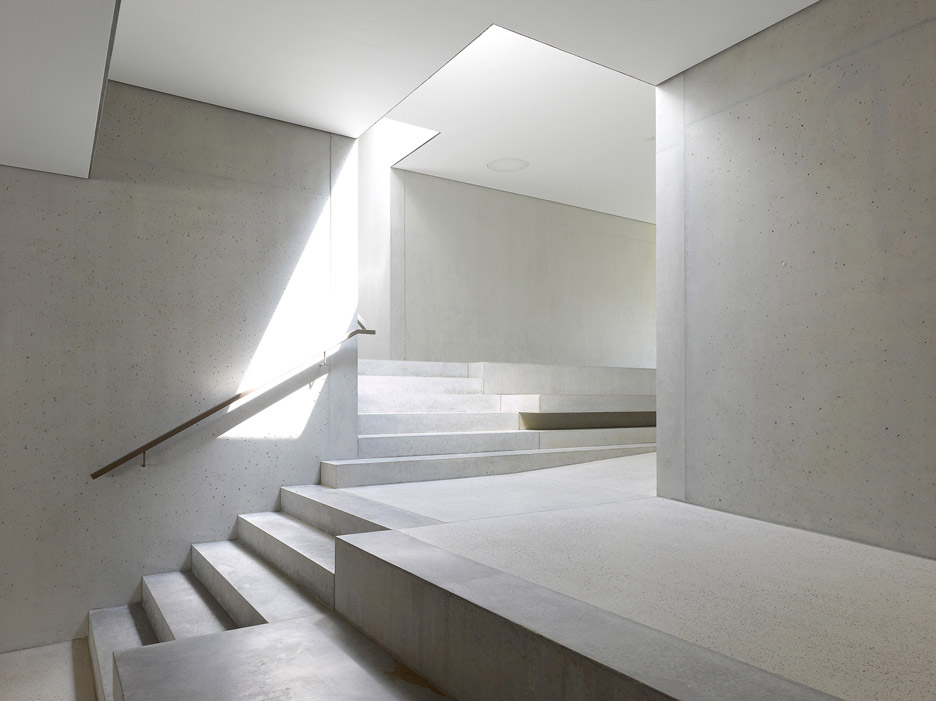 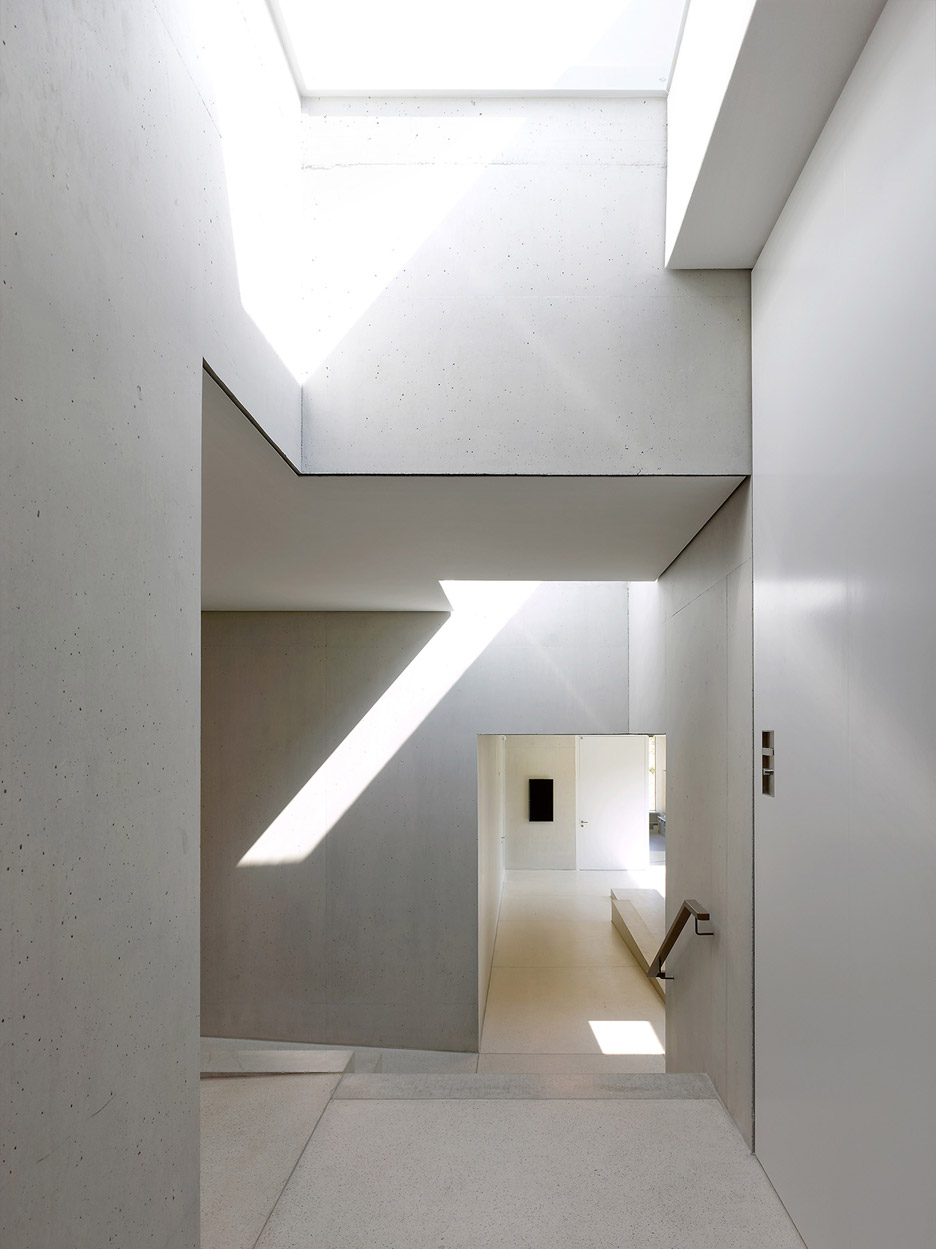 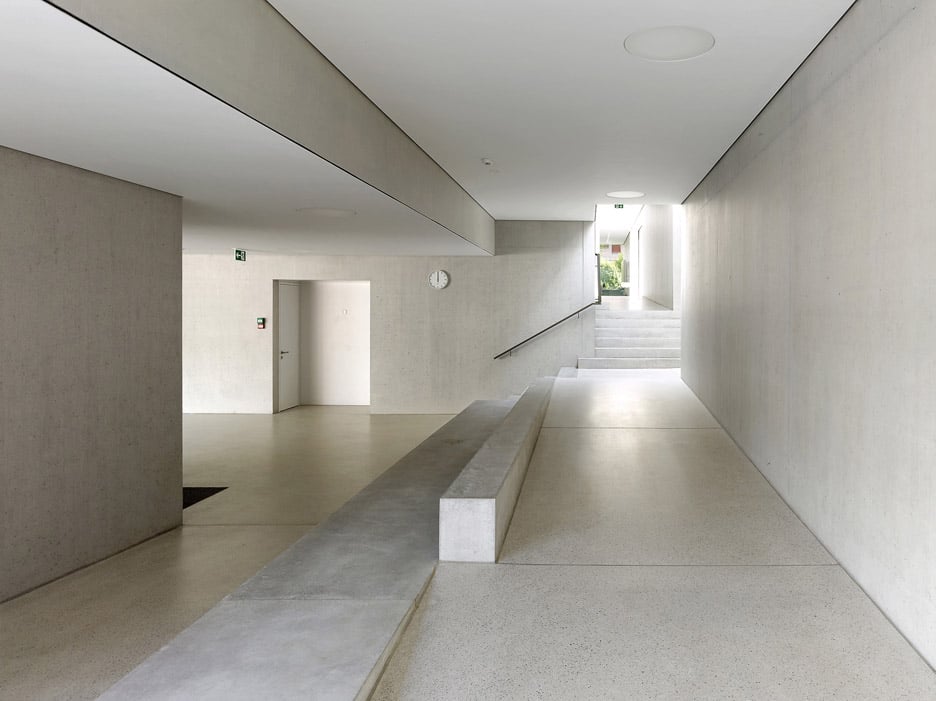 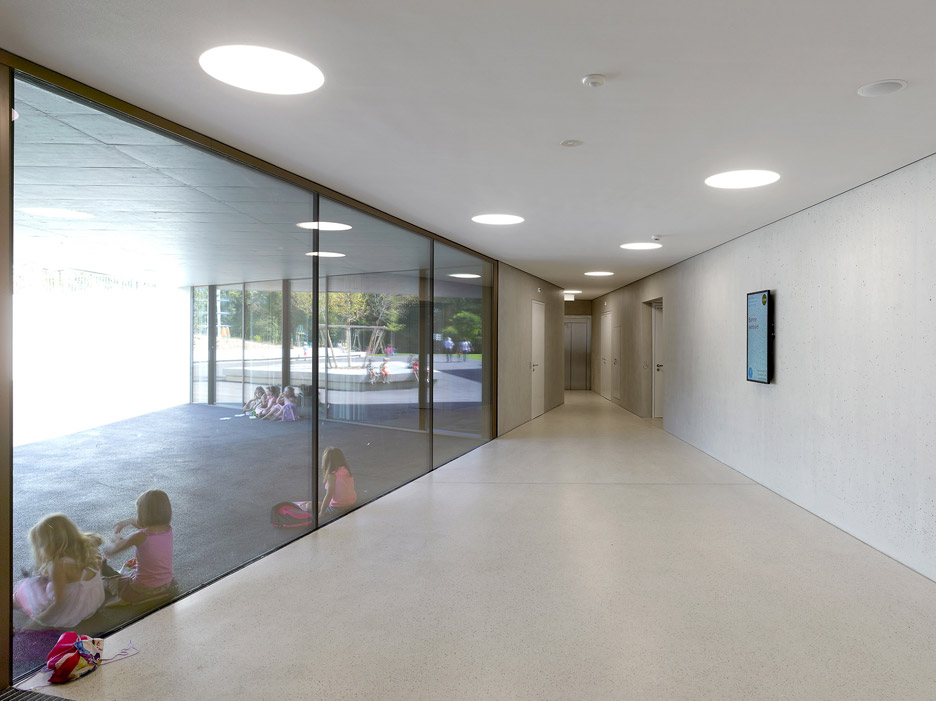 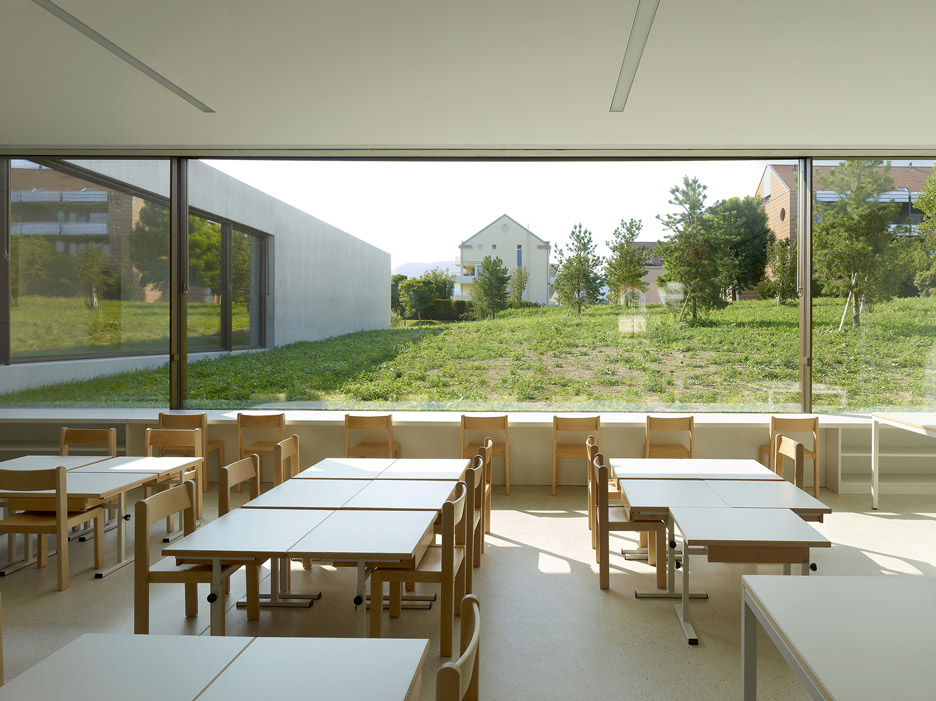 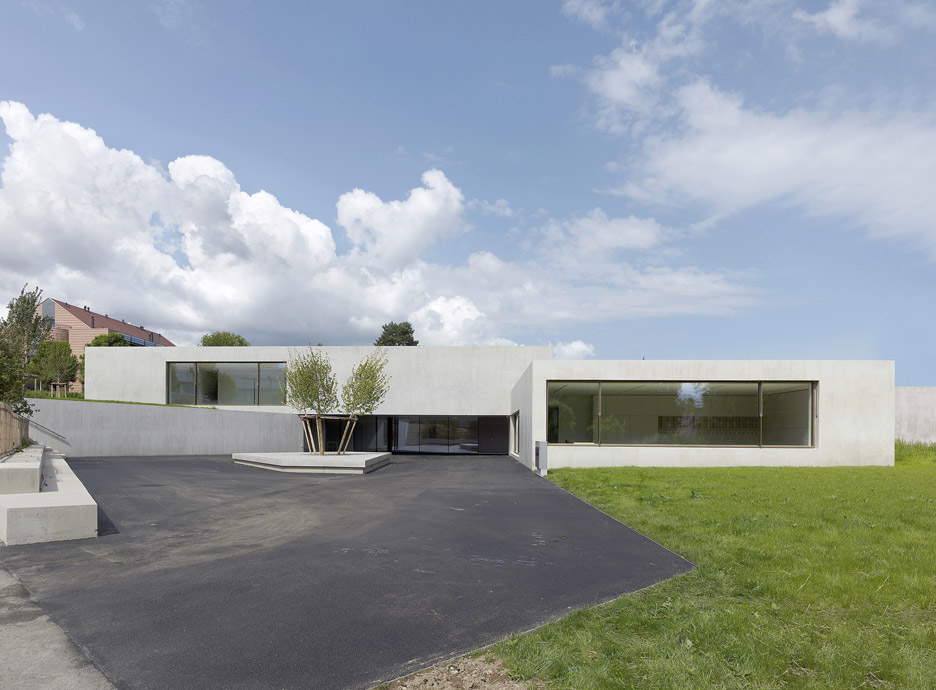 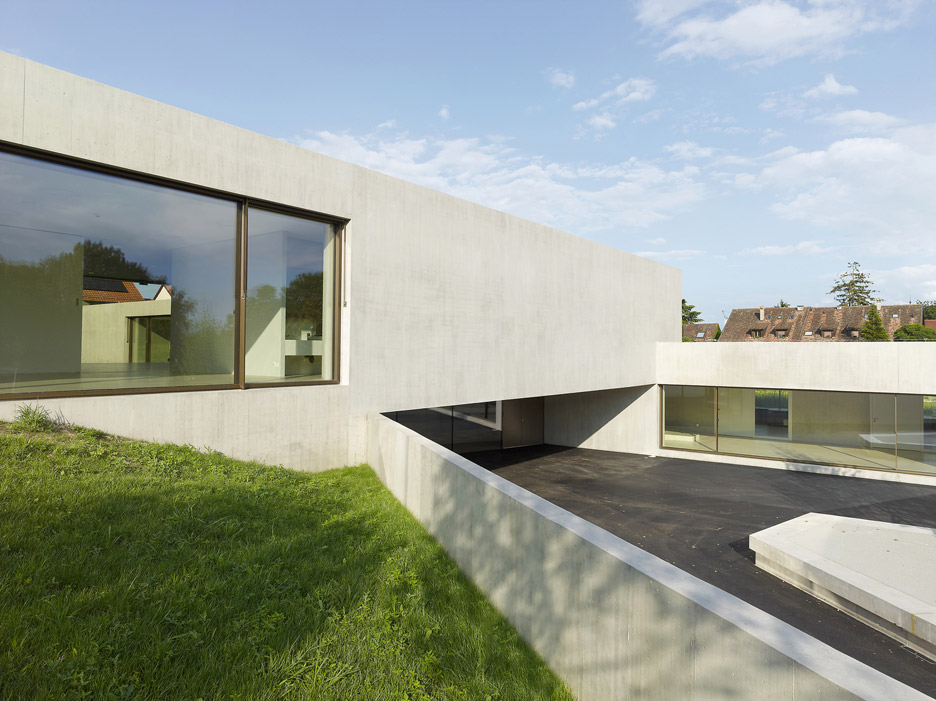 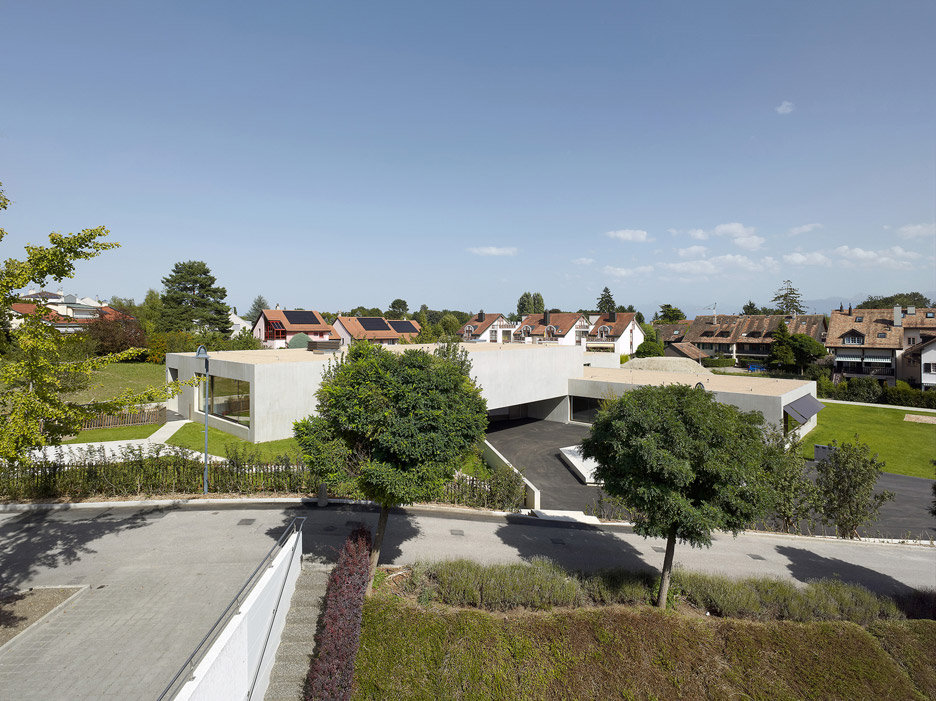 Architect Pierre-Alain Dupraz chose exposed concrete for this cross-shaped kindergarten and crèche in Switzerland, giving it an austere appearance.

Located in a town on the shoreline of Lake Geneva, Kindergarten and Crèche in Prangins is made up from four rectilinear volumes that overlap at one end to give the building a crucifix-shaped plan.

Geneva-based Dupraz selected this form to help diminish the scale of the building, helping to lessen its impact on its surroundings.

Three of the four volumes are embedded into the lower level of the sloping site, while the fourth is elevated on a concrete wall to create a porch over the building's glazed entrance.

Reinforced concrete provides the structure, and is left exposed both inside and out.

The architect envisioned the building as "one big house" rather than a school, taking a similar approach to Japanese studios Rhythmdesign and Case-Real in their creation of domestic-scale rooms for a nursery in Kumamoto.

Two classrooms are located in each of the three lower volumes, while the elevated block contains the crèche.

"The new Prangins kindergarten is conceived as one big house that has been placed on a sloping site," said Dupraz.

"The cruciform structure resulting from the interlocking volumes allows it to have a special relationship with the neighbouring ensemble."

"The four volumes, which are mutually staggered by a third of each unit's floor height and interleaved, make the building appear to be smaller and visually less obtrusive," he continued.

The concrete-lined classrooms are furnished simply with wooden tables and chairs, alongside neutral-toned textiles.

Large windows positioned in the ends and flanks of the blocks are close to ground level, offering a child's-eye view of the grassy grounds. The large windows and skylights allow natural sunlight into the heart of the building, casting dramatic patches of light and shadow across the concrete corridors and staircases.

"The natural qualities of the location are highlighted by the different alignment of the large window openings, since the design paid great attention to visual relationships with respect to their placement," explained the architects.

The staircases and ramps that link the building's varying levels sit at the axis of the four forms, forming a "fundamental, structure element", according to the team.

The creche wing can be accessed internally through this staircase or from the exterior at the highest level of the site, allowing it to operate independently from the kindergarten. This single open-plan space can be also subdivided into smaller units if required.

Photography is by Thomas Jantscher.